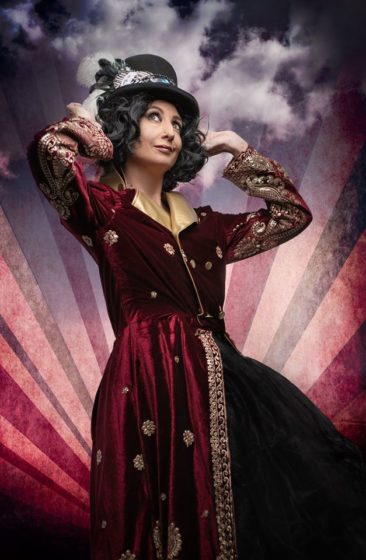 The tale of how The Phantom Circus came to be is probably one best told over an adult beverage.  If you’d like to hear it, let us know.  What follows is the truncated five-minute version:

Natalie Brown was a lifelong performer and creative living in New Orleans, working as an entertainment journalist, and rehabbing a back injury through tribal belly dance lessons when Hurricane Katrina blew ashore.

Evacuated and displaced in Columbia, South Carolina, Natalie did what she always did to work through things: she danced.  Six months after the storm, Natalie formed Delirium Tribal Belly Dance Company.  A professional circus company called Alternacirque formed on a lark under her direction a year later.  When the small town rumor started whispering of a belly dancer with an alternative circus performing regularly in a bar parking lot a block from where the confederate flag flew on the State House steps, curious denizens came running.

Natalie and Alternacirque were at the forefront of an arts and cultural renaissance in Columbia for the better part of a decade.

Alternacirque closed its doors in 2013, and Natalie moved west to Colorado the same year.  She completed Pro Track "circus school" aerial intensive training at Frequent Flyers Aerial Dance in Boulder in 2015, and with the help of Founder and Investor Jonathan Cover, started her dream company The Phantom Circus in 2016.  Headquartered in Denver, Phantom has been a trailblazer in Colorado, amassing a large roster of top-tier talent, selling out public shows at CSU and the Oriental Theater, and becoming the go-to high-end circus entertainment company for private and corporate events nationwide.  Performers at the Phantom Circus have performed for Cirque du Soleil, Dragone, Marvel Universe Live, Royal Caribbean, and have attended some of the top circus schools on the planet.